In the mass graves from the battle of Visby in 1361 about 185 mail coifs been excavated. Some is pretty well preserved, while most of them have disintegrated a lot, into smaller pieces, making it laborious to study them.

Since Bengt Thordeman study in the 1930s which was publiched in 1939 in the well renown book Armour from the battle of Wisby 1361, little research have been done on the findings. Tommy Hellman made a study in 1995 on ten mail coifs. Hellman wrote:

”I wanted to know more about the mail coifs and my examination did not disappoint me. Inside some of the coifs I found traces of linen, most probably rests of the lining I was looking for. The coifs that could be typologically determined turned out to be of similar type, having no ventail (a partly loose flap of mail to protect the chin and mouth). The lower parts of the coifs consisted of two square or rectangular flaps of mail protecting the upper part of the breast and back respectively. This kind of coif can be seen in European art mainly from the latter half of the l3th and the beginning of the l4th century.”

Tommy’s article can be found here, it’s in Swedish, but hopefully you can use a translator service if ypu don’t understand Swedish. .

Hellman was able to identify that the mail coifs that was complete enough to study the construction had a square collar. However, as these coifs are corroded and have been preserved with the help of a paraffin wax, they are hard lumps, which makes it hard to study details in the construction. There is however another mail coif from Gotland that’s very well preserved. The coif from the church of Tofta, that was found during an attic cleaning in 2004. Since it had sometimes been thrown after pigeons to scare them away, it had not rusted together completely to a lump. This coif has been dated by a string of leather still remaining on the coif to mid 13th century. This string is the remains of the strings used to fix the hood on the head. In its current state it weighs 1.1 kg. It is made of alternating rows of solid and riveted flat rings. The material has been shown by analysis to be tough partly phosphorus-containing iron. (Based on the report from the conservation made by ACTA in Stockholm). ACTA hava a number of pictures from the conservation. Look here.

The construction of these hood is very simple. From the spherical top, it is just a tube. The face opening is created by a couple of rows are omitted. This simple solution works very well with the adjustable mail. When put on the mail form an oval opening around the face. The mail falls in under the chin making a pretty tight fit. The collar is made with just slits at the shoulder with a small wedge.

Niclas Vennström made a reconstruction of a mail coif inspired from the finds from Visby to the exhibition “Medieval Massacre – the Battle of Gotland 1361” at Swedish History museum.
Here are some poor pictures of me trying it out. 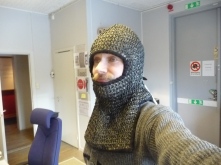 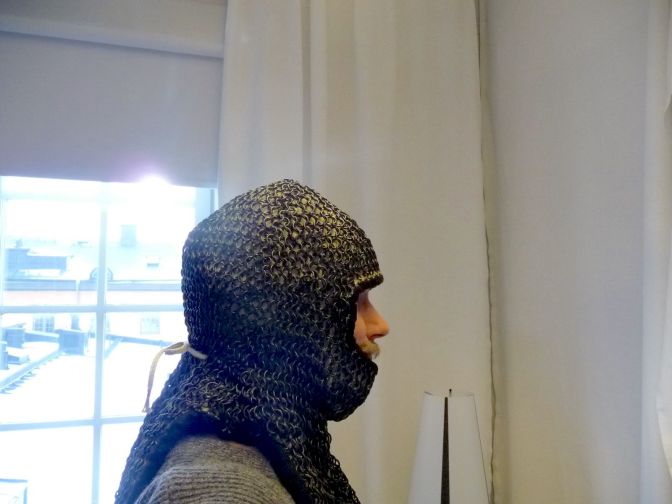 One thought on “Construction of mail coif with square collar”